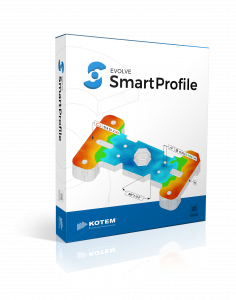 Budapest, Hungary August 3rd – Kotem officially released our fifth generation of the SmartProfile software. The update to EVOLVE SmartProfile now brings all of the EVOLVE software modules to the same revision level and provide many new features.

Many of the things we learned in building our EVOLVE Design for designers we decided were features that quality people would appreciate too. Kotem’s enhanced Explanatory System, for example, was a direct result of our efforts to help a designer “proof” their designs and explain to them why Kotem said that items where wrong or not best practices in an effort to provide guidance to them but it also provides a means of consistent application of the GD&T standards by designers which we believe with giving a real benefit for the quality people that received models with better GD&T

and how it can help your business